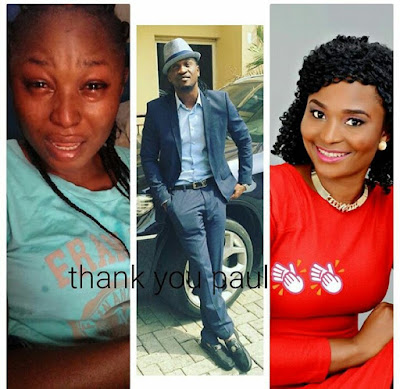 During the period the Okoye brothers were having issues, some fans and loved ones reached out to them to reunite.


Patience Erdoo Yisa is one of such – she made a video pleading with them as she shed tears. They saw the video and it was one of the things that might have motivated the Okoye reunion.

Today, she posted a touching story on Instagram of how Paul Okoye helped her out of a rut:

How @rudeboypsquare saved me from being evicted from my saloon. So many people might know me as “the girl weh cry for psquare” , but am also an up and coming actress and stylist. Recently my saloon rent expired and couldn’t pay, begged my landlady to give me sometime but she complained bitterly that she needs to pay her children’s school fees. The pressure was much, business was not moving, and the only person who would’ve helped me out (my mom) had not received her salary since February. One day I woke up and was moved to contact rudeboypsquare, though we haven’t met officially but we chatted sometime in april after releasing that video (pleading for psquare to reunite and work things out). I contacted him and explained everything to him, he replied immediately and asked for my account detials The next day I got an alert from him. The essense of writing this is to show him how grateful I am for the prompt response …., @rudeboyosquare thanks for being a brothers keeper. God bless you more and more and more with more #bankalert, Amen.@rudeboypsquare @rudeboyrecordz @peterpsquare @mamuzee2
at 10:49 AM